Inspiring a Sense of Personal Pride

We're half way through April!

I feel like I'm settling into a new routine of sorts. I sense that we all are. Much of the unsettling upheaval feeling has dissipated and now things are sort of rolling along in a way that feels like a new normal has been established. It's one I think my family and I can live with for a while.

How have things shifted for you? Generally speaking, these things come to the top of my head:

~Everything in our days (speaking about my family here) seems to have been shifted back an hour or so. We wake up a little later (ok I don't but husband/kid do), lunch is a little later, dinner is a little later, bedtime is a little later, etc. I don't feel like I'm in as much of a rush to get things done 'on time' bc time is so abundant. That said, sometimes days just FLY by and I'm like HOW is it 4:00 already!?!

~I spent a lot of time learning how to use new apps. Its easy to see why Zoom is popular. It's so simple to use. No learning curve required! Just download the app and put the meeting code in and you're there connecting with your people! I've started hosting weekly TeamBSC Zoom meet ups just so we can connect and chat and that has been a positive change that we will keep going even after society goes back to 'normal'.

~I've also been playing around with the new 'group ride' option on Trainer Road. This one was a lot more complicated for me, but I think it was because the new desktop app that is required had some bugs when it was first released. After ripping my hair out in frustration trying to get it to work, eventually I did, but not without unloading and loading the app a bunch of times. That said, once you get it set up, I think its potentially quite a 'value-add' for coaches and athletes because we can be riding at the same time together. I've sort of come to the conclusion that for *us* *right now*, the best use of these group rides is just to do our aerobic rides together. That way we can actually talk! We tried a harder ride but I think most of us are pretty good at pushing hard on our own so we'll probably do more of our aerobic riding together and consider them more like social hour spins. :) 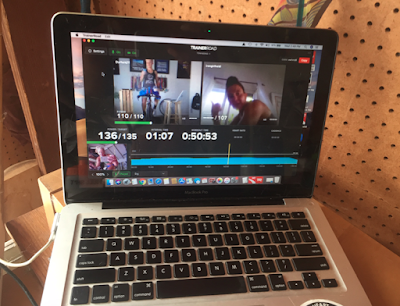 In a weird way, I feel like this recent upheaval has actually been a good thing for me as a coach. It's forced me out of my comfort zone, forced me to find new ways to connect with my athletes and motivate them since races (as we are used to them) seem to be a ways off. Though maybe not too far off?? WTC announced a new dates for Puerto Rico 70.3 today (Sept 6) so there must be some officials somewhere in Puerto Rico who are at least mildly optimistic that they'll be allowing travelers in by then. So maybeeeeee....

It's been good for my kid (in some ways) too. Right now, as I type, she is on a Zoom Meeting with some of her neighborhood friends as they conduct a "Book Club". They came up with this idea all on their own... They picked a book, gave each other time to read two chapter, and are meeting right now to discuss it. They are 8-11 years old. So impressive.

So we're half way through the month with our TeamBSC #GoldStarProject and I have to say, I have been FLOORED by the peaks my athletes are achieving right now. I mean, ok maybe some have some low hanging fruit if they've never *really* attempted specific peaks for short durations, but I'd say the vast majority of the stars they are earning are just outstanding efforts and its been so inspiring for me to open files all day long and see star after star after star pop up. ⭐ We're mostly going for short distance peaks from 5" to 10min on the bike, though some people have earned peaks over longer distances if they're jumping into other challenges like the IM Virtual races and such... I don't think anyone has earned Gold Stars for all 4 short power peaks YET (5sec; 1min; 5min; 10min) but a few are close with 3 achieved already! Personally, I've got my 1min and 5min peaks... I've earned a 2nd and 3rd best all time 5 second sprint peak and am still trying to mentally prepare myself for the effort required to hit my 10min one... I have a distinct memory of the effort I put out to achieve the one I did several years ago and would be lying if I didn't admit I have a little bit of fear about whether or not I can do that again! I will give it a go though! If I hit my all time 5min peak then it makes sense that I have the fitness to hit the 10min one too so... #confidence

Keeping track of the peaks on the graph Moana created has been a fun project too! I swear, I thought *MAYBE* if we had a great month we might collectively hit 50 peak performances by the end of the month... But here we are half way through April and we have 67! I've had to rescale this graph several times already to make sure all the stars can fit. #triathloncoachproblems 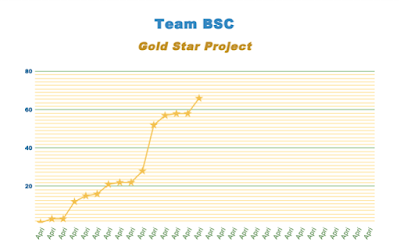 Some of these are short distance running peaks as well. I'm a little more hesitant to tell some athletes to go after the shorter run peaks bc the potential to hurt yourself is way higher... I don't want anyone ripping their hamstring or groin in an effort to get Training Peaks to award them a gold star! But as they're ready some are going for it and its been invigorating! Truly. The feeling of personal pride is something everyone cherishes regardless of the crap that's going on in the world around them. I'd argue that the feeling of personal pride might be even more important now than it's ever been. I mean, you can just feel how stoked Casey is with his shiny new All-Time 5min peak power effort!! This is what I was hoping this project would inspire... 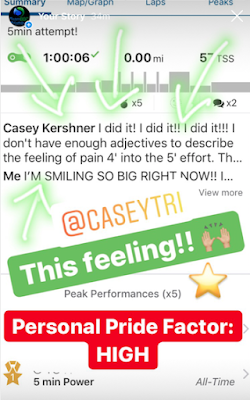