BatCamp was fun this year! I mean, it’s always fun but I don’t always get to go, so for me, it was a treat to get to go. Krista has been running this camp in Scottsdale yearly since 2012 and I’ve gone a handful of times. This year Taryn went too so we had 3 coaches which was great b/c we could have more support for the 16 athletes who ended up being able to attend. 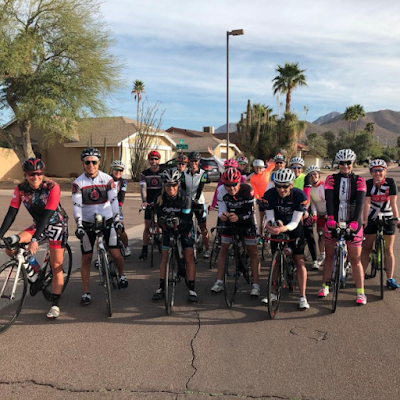 We didn’t advertise the camp outside of our team b/c in all honesty, that’s a big enough group to try to manage. I’d way rather spend my time and energy working with and getting to know my own athletes vs trying to run a camp for a bunch of athletes who we do not know just trying to make money. We don’t charge a lot for our camp and that’s by design. Our goal with it is not to make money- it’s to have an opportunity to train together and get to know each other better so we can be more effective coaches going forward. Plus, it’s a great way to foster community within the team! So, we pretty much just cover our costs and call it good, which is kind of how I feel like it should be. I don’t understand spending $1000+ camp fee to train for 4-5 days. (Or $11,000 what??) Triathlon is already expensive enough, you know?

As a coach, one of my goals for camp is that everyone leaves feeling like they are stronger and more capable than they thought they were coming in. So. We push some boundaries. When we are there and watching/guiding in person, we get to learn a lot about our athletes... How do they respond in the face of adversity? What kind of support do they want/need from us? Some need a lot. Others don’t need much at all (just the time and opportunity to train as much as they can is all that’s needed for some)… So we try to provide what each athlete needs. 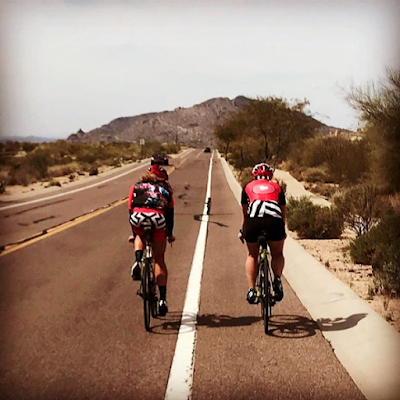 I think we did a decent job of balancing getting as much endurance work done as we could while also teaching some necessary skills to those who are newer and haven’t learned yet… Some athletes learned to break down/pack and build their bikes, where to focus your weight when you’re descending a hill on your bike, how much food is actually necessary to support big training loads like that, etc. 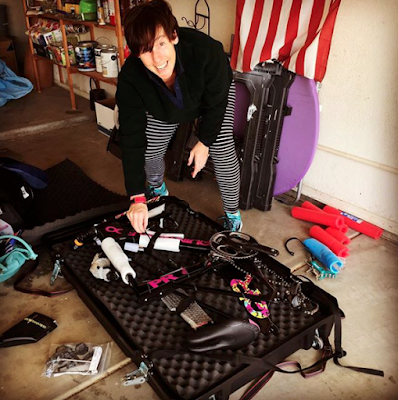 I got to give a couple of 1:1 swim lessons and those are always valuable as well. Others were really just there b/c they’re training for an upcoming ironman and they wanted to get off their trainers for a long weekend. So. We tried to balance all that. One thing I’ve already decided I’d do differently next time would be to give a basic tutorial about circle swimming etiquette. It just sort of slipped my mind that most of these athletes do their swim training alone and never really do circle swimming with 3-4 in their lane all doing the same session… so circle swimming etiquette is new to some! I should have taught that and I’m sorry I didn’t before our big group swim! #duh Next time I’ll be better! That’s another great thing about these camps. The athletes aren’t the only ones who come away with valuable lessons about how to be better. The coaches do too! 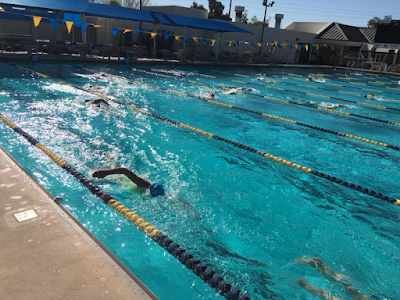 So we were based out of Scottsdale and wow I just have to say, the riding there is really pretty great. I used to live in Scottsdale so I was familiar with most of the roads we were on so a lot of it was pretty nostalgic for me (so fun!). And while we have some pretty nice ocean views where we ride in Hawaii, the actual roads we ride there are crap… and super busy with cars/traffic. So to be on these perfectly paved roads with wide bike lanes with long/gradual hills everywhere was a serious treat for me personally. We did go to Tucson on Sunday to ride Mt Lemmon, which (imo) is the best ride in Tucson… Over the years I’ve ridden Madeira Canyon and Kitts Peak and Gates Pass and all that and while I guess that could be good riding, the road surfaces are crap in so many places. I feel like given the choice, I don’t totally understand why there are so many camps based out of Tucson vs Scottsdale? It’s a no brainer for me where I’d rather ride! 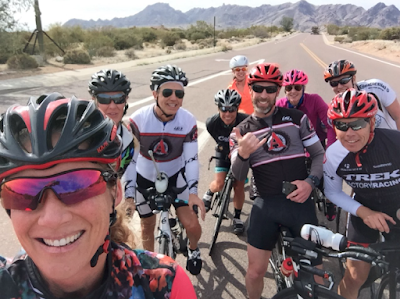 Weather was pretty good for us. Personally I spent a lot of time shivering and shaking b/c 50 degrees is not something I’m used to at all anymore. I’ve definitely become more of a weather wimp after living in Hawaii for 13+ years. For the most part this past weekend, I stayed dressed with vests and arm warmers and tried to not speak when I had nothing nice to say... and for the most part I was ok. Mt Lemmon required a special kind of head space b/c it was really quite cold and raining off and on and even snowing at the top (so I’m not exaggerating this time when I use the word ‘freezing’). 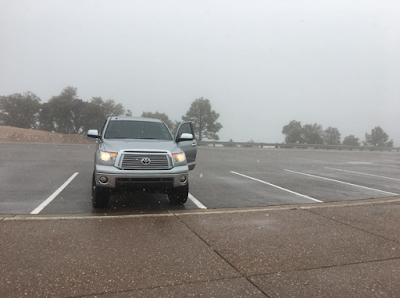 That day was hard for me personally b/c while I wasn’t afraid of the climb nor the descent, I was afraid of 30 degrees. And I wasn’t comfortable taking a big group of athletes, whom I love, up that mountain and then sending them down a 20 mile descent in that weather. So my stress level was HIGH that morning. We had been watching the weather forecasts and had an idea of what it might be like near the top but we decided to try to get there and we left the decision to our sag drivers to make the call about whether or not it was reasonable. Krista’s husband and friends drove up past Windy Point and decided that it would be irresponsible to send riders up any further than ~6600ft that day. So while it was a huge bummer to most of out first timers to not get to the top, on that day, it was the right call. That kind of day is emotionally expensive for a coach. I mean, we are BatShitCrazy, yes, but we are not irresponsible. Instead, we turned back to the base and then some people went back up another 6-7 miles while others (like me) did 4-5x 10min repeats up and down at the bottom. The whole time I was doing that last part I had that Dave Matthews song in my head ‘Best of What’s Around’… So it was not an ideal situation but we made the best of what was around and did what we could to at least get a good training benefit out of the day. #adapt 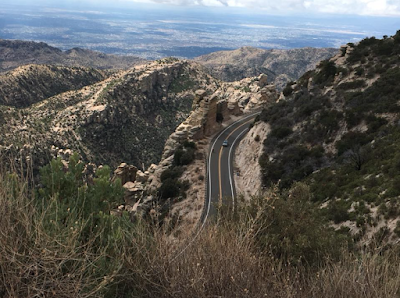 As coaches, running a big camp is one of the most demanding weeks of the year. Maybe if we cared less or didn’t try as hard to make everything perfect, it wouldn’t be so hard, but we do care and we do try. And I think this is what makes us good. Attempting to keep 16 athletes happy when they’re hungry and tired isn’t easy. But we reminded everyone to EAT all the time (some listened, some didn’t, and all learned valuable lessons about this!) We had a bunch of Honey Stinger fuel and Base bars and NBS Hydration/Recovery for everyone so that was clutch b/c no one was ever without access to fuel and hydration. Every day via sag we lugged around a 5 gallon tank of NBS Hydration and riders filled up at every opportunity. 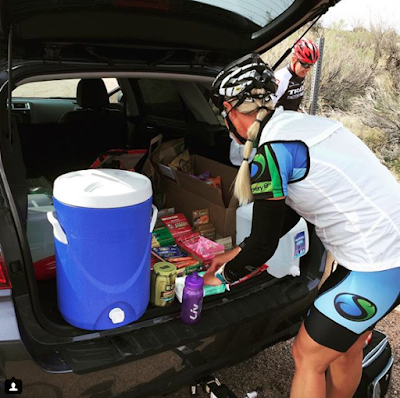 Even with that, I found it surprisingly challenging to stay truly hydrated in such a dry environment. I could write a whole blog post on this, and maybe one day I will, though I still have to sort through some more of my own thoughts and theories before I’ll do so. While lots of people are concerned with how to go from a dry environment into a humid environment and still perform their best (ie how to perform in Kona), there isn’t much info about going the other direction (when you’re adapted to humidity and your body is great at cooling but then you go the the desert and shed all your body water on day 1 and then try to play catch up the rest of the time)… This is a topic that I currently find myself obsessed with so maybe keep an eye on this space if I get it together to write out my thoughts about how one might handle that transition. For me, its harder than it seems like it should be. Still working on this! #lifelonglearner 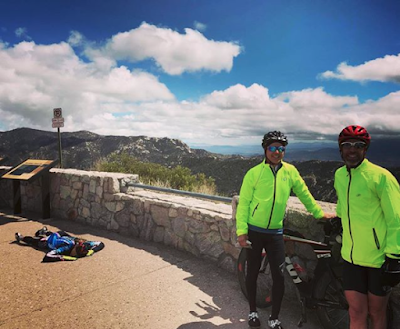 As depleted as I feel at the moment (physically and emotionally), I also feel incredibly proud. This morning I woke up to a Facebook message from an old friend of mine who had seen a bunch of pictures and posts about what we were doing all weekend… She reminded me that I started coaching from scratch 9+ years ago and to see the team/community that we have created is really pretty incredible. I’m pretty proud of it all. That’s actually a complete understatement. I’m exceptionally proud of the coach that Krista has become and the coach that Taryn is becoming. The three of us make a great team and we work together really well. And with that dynamic, we are better for our athletes. It was super cool for me to get to know some of Krista’s athletes, and for her to get to know mine, and for all of them to get to know each other. So going forward, our whole community will be stronger. Of all the benefits of a team training camp, to me, this is one of the biggest ones. So even though at the moment I’m incapable of speaking above a whisper (my vocal cords are fried - no one has ever accused me of not talking enough), I’m super satisfied with what we all achieved this weekend. 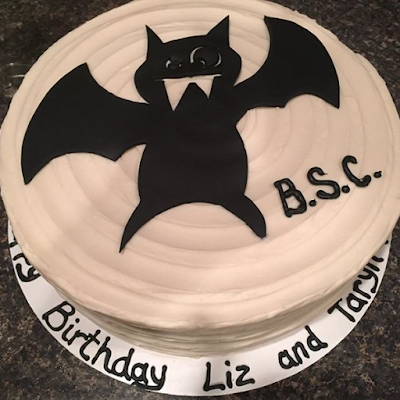 Posted by Michelle Simmons No comments: