About 5 weeks out from Ironman Louisville… If you've ever trained for an Ironman before you have an idea of what things are like at the moment. Sometimes it's fun to get a little glimpse into how it's going for others so here's a bit about how I'm coping at the moment.

Training has been pretty big, but not that so big that I feel like it's the reason for my current state. Mostly, it's the combination of the training and the stupid weather we have had this summer (count how many times I use the word stupid in this blog… Might be worth a drinking game).

This is my 10th summer here but I swear I do not remember previously being as HOT as much as I have felt this summer. There are a combination of factors I'm sure that come together and cause the misery… Mainly probably that it's El Nino + hurricane season + Ironman training at the same time. Plus I still never got the air-conditioning fixed in my car… I don't have an escape at an office that feels like an ice box, though sometimes I spend some extra time in the freezer section at Costco. That's probably my only real escape this summer. #sad

See our little state sandwiched there between those big red blobs? Those are some pretty big storms! I guess it was a first ever or something… 3x Category 4 hurricanes in the Eastern Pacific at the same time. So far the storms have either moved south or north as they travel west so we have not had a direct hit, but just having them around has impacted our weather in that our normal trade winds have been cut off most of the time the last few months, and those storms make the air more humid than normal. I'm 41 and just recently learned what 'dew point' means (when it's high like 74-76 it means it's miserable outside regardless of actual temperature). Got it.

I'd like to think that I'm an athlete who handles heat pretty well. I mean, it's pretty much all I ever get exposed to so I should be used to it, right? Unfortunately, it's been less than enjoyable trying to train long in the conditions we've had recently. And I'm coming up with a theory that being over-exposed to these conditions (like when you're training for an Ironman) actually results in being less able to handle them well. I'd guess some of that is mental b/c repeatedly you just always feel like shit and that gets old over time... And I have this weird aversion to the sun right now, often thinking (and saying out loud) I HATE THE SUN. I'll spare all the details, but some "highlights" of how things have recently gone down:

Before my swims, I have been packing a cooler full of 4x bottles full of ice water. I figured out I go through ~1 bottle every 1000m squirting it on my face and neck and arms trying to bring my body temp down. Then I take the ice and stuff it in my swim cap. It lasts 200-300m before it melts completely, but pushing off the wall after a flip turn feels great because as it's melting my whole head gets covered with really cold water. Then I go back to suffocating and thinking how stupid swimming is. I don't know how warm the water is… mid-eighties at least. It's a bummer b/c I've come to the realization that I hate swimming in water like that. I don't want to hate swimming, and I hate it that I hate swimming, but swimming in that water makes my whole body feel like it's been boiled and then I'm useless for the rest of the day. (This doesn't bode well for bike rides that come after swims…) 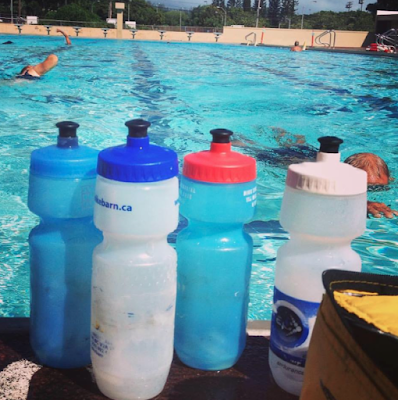 I've had some decent bike rides recently, but the pattern goes that biking after swimming has resulted in some pretty pathetic riding. Last week when I was supposed to ride after a longish swim I made it maybe 90 minutes before I just couldn't take it anymore and I bailed on the ride and went home and sat in front of a fan for the rest of the day. I just felt like I was suffocating and there was no part of me that wanted to do it anymore. This week (yesterday) I had a similar swim/bike day on tap and I tried my best to manage it by taking the swim intensity down a notch. That helped some but not really because I got on my bike and again just felt like ass. ARGH. The rest of the ride I spent battling in my head about how I did NOT want to be out there but yet I was NOT going to bail again. I solved the problem by turning my power meter off (nobody needs to see stupid numbers like that) and stopping more often for ice. I did make it through to the planned duration of the ride but couldn't hit the planned intensity pieces at all. I'm calling it a win though because hey, I didn't quit.

The worst thing about yesterday was that as I was riding- the whole time- I was just like this is stupid (drink!). I hated riding my bike. I even cried a little and I haven't cried on my bike in probably 15 years! The thing is though, I wasn't crying because I was biking poorly. I was crying because I was so sad that I hated it so much. Normally, I love riding my bike. I love Ironman training. Right??! I really didn't want to have those feelings of despising swim bike run, but I was having those feelings about despising swim bike run… And that made me really sad. Like you know what? Maybe this is it for me. Maybe this is my last Ironman and after this I'll give it up. I've always said that when I don't love it anymore I'll stop… but yikes that thought makes me cry.

You can only imagine how my recent runs have gone… If it's too hot to properly swim and bike, one should probably not even attempt running. And yet, I have been attempting running most days of the week. I downloaded a neat weather app on my phone that does a decent job of predicting if it might rain in the afternoon, so on those days where it shows clouds/rain building in the afternoon, I've procrastinated waited patiently all day before heading out to run. So on the days when it dumps rain, I get these glimpses of like Hey maybe my running doesn't totally suck, but then the rest of the time I'm left thinking Blah just forget it my running totally sucks. 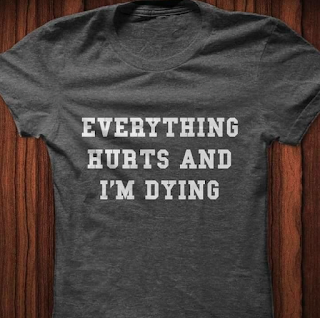 So what does a cooked triathlete do when there's a 19 mile run on the schedule but the weather app shows high temps, no rain, and no wind? (She paces back and forth, calls everything stupid, and can't decide what to do!) Honestly, the thought of being out in the sun again all day was worse than the thought of running in place like a hamster for hours on end, especially if the hamster option was the one that included air-conditioning. It actually wasn't much of a decision because as much as I wasn't looking forward to spending the morning on a treadmill, attempting that run outside was simply not an option today. In good news, once I wrapped my head around the idea that I was going to be on that machine forever, it was fine. I downloaded a few new Undisclosed Podcasts (listened to Serial?! If so, listen to Undisclosed! Thanks to Lectie for the rec!), packed up a cooler bag full of iced Osmo (4x bottles!), packed some snackz, and drove off to the gym.

In good news, I didn't hate running today! That was such a giant relief! After yesterday, the last thing I needed was another day of an internal mental/emotional battle with myself. Today was none of that. It was very matter of fact get the job done kid of thinking, much more like how I remember myself as an athlete. The relief there was in the realization that I don't indeed hate swimming biking and running. I simply hate suffocating. So when I can take the suffocating out, it's all good. #phew

I'm not really sure when the weather that makes us suffocate will go away and we get back to having the best weather on the planet… Probably right about the time I'll be done Ironman training. Until then I'm going to try to remember how I felt today. And I'll sit here in front of my fan a lot. 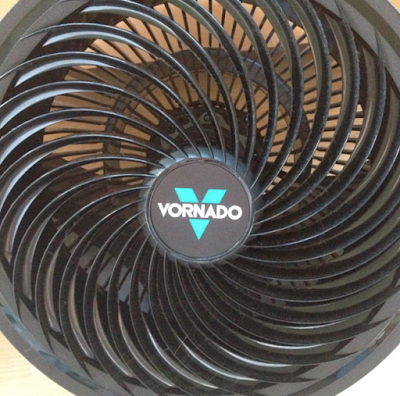 Posted by Michelle Simmons 2 comments: Links to this post