So its that time of year again... Time to swim more than any of us really should. Last year when the Endurance Corner Swim Challenge was on, I had run myself into an injury and therefore had some extra time on my hands. The game is essentially about swimming as much as you can and scoring bonus points along the way by taking on different 'challenges'. It was a good distraction for me and I set about swimming 5k (or slightly more) each day for 14 days and since I was the only one who did that, I won the game. I totaled just over 77,700 meters in the 14 days and that was apparently more than anyone else had done in the history of the game. Pretty cool!

Fast forward to this year... I am not injured and have been building my bike and run. So when the swim game was announced, my thought was just sort of that I would play, and log my swims, but I wasn't going to try to swim more than I swam last year. I mean, I thought maybe I could still win it but on less swimming??

HA! This year it appears some folks are more motivated than they were last year and the game is ON. It's Day4 and I thought I'd start a little running blog here which will be fun to publish when this is all over. My current thoughts at the moment:

So let's go back!

Day 1: Super proud of myself for knocking out 6500M. I figured if I wasn't going to swim every day then I should swim big on the days when I was swimming, just to give myself a decent total at the end. Come home, log into the leaderboard only to find out that Larry freaking kicked the challenge off with 9100m. Um. What?!

Day 2: No swim on my training plan today but I snuck off to the pool anyway to get 5k done. I figured if I skipped a day then for sure I was out of the game and I wasn't sure I wanted to count myself out on day 2 so just in case I wanted to really play, I'd still have a chance. Bonus point today for Timed 5k straight (1:14:42, LCM). I opted to do it this day b/c I only had 90min to swim before the pool would close and I figured that was the best way to get as much done as I could. 300 easy c/d gave me 5300m for the day and I was happy with that, until I came home and found out that Larry popped off another 6300 and a gal I didn't know named Lindsey swam 6k Monday then 7k Tuesday... Um. These people aren't screwing around?! So I sent a note to my coach and told him that I was thinking maybe I should really play because you know I hold the record and to just let it go because I didn't feel like working that much wasn't exactly sitting well with me. Honestly, most coaches probably would have replied with some reasonable statement about how its just some dumb game that doesn't mean anything in the big picture... You know, let it go and instead focus on keeping a balanced program... But Vince replied and said, That's awesome you should go for it. Swim as much as you need to to win. I have to say, having a coach who understands that yes its just some dumb challenge but really, there are some serious benefits to be had by exploring your limits and allowing that competitive side to come out made me happier than ever that I hired him as my coach. It's like, he gets me. At this point in my athletic life, that might just be the #1 thing I really need in a coach! So. This is when I decided to really play the game.

Day 3: Swim with Mark as normal, but tack on an extra 2k or so at the end. 6200 gave me 18k for 3 days which I thought was SOLID. Larry and Lindsey both swam more than me though so their lead was increasing. And Chris joined the game and logged something crazy that put him ahead of me as well. Right behind me were Jeff and Laura. I mean, 6 people with 17k+ in the first 3 days? Holy Crap. This is insanity! 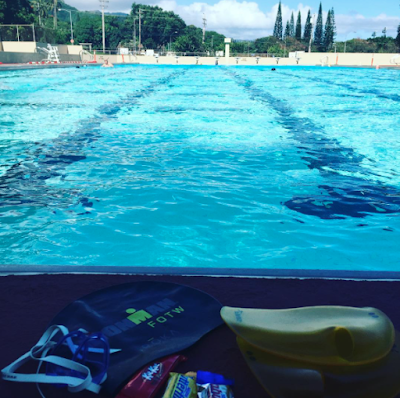 I gotta say, at least I'm not spending 2 hours/day in a little indoor 25yd fishbowl! Hats off to anyone on the mainland who does that. This is where I've been swimming for 12+ years now. Super spoiled, yes.

Day 4: This blog is mostly about swimming but I'll just mention that I have also been trying to keep up biking and running mostly as normal... This morning I tried to ride a key/quality ride but just had nothing. HR was depressed, watts were low. It was frustrating but I understood and wasn't surprised. If I keep this game up I'm going to have to back off bike and run b/c here's no way to swim as much as this and still ride/run without digging some super deep hole. At least, I can't. I swam alone this afternoon... I'd checked the leaderboard before I went and saw that Jeff swam 7k today... So Ok Jeff! I see your 7k and raise you 8! 8100m as: 4x2k with 100 easy c/d. Nothing really hard about it- just volume. Funny how I've wrapped my brain around 8k and decided it's not really that far. Our brains are funny like that. (Spoiler alert: I think this is one of the benefits of playing a game like this- it completely redefines our own perceived limits.) I finished feeling sunburnt and tired but I was sort of stoked thinking for sure I'd have closed the gap a bit to Lindsey and Larry. I was stoked to log my swim, only to see they both logged 8k today as well. No gain. Gah! Are they seriously going to keep this up for the next 10 days? I have to believe they will, which means I am going to as well. I might not win this thing but I'm not going to just give it to them. They will have to earn every bit of it.

Day 5: Swam my first double today. Truly, it's WAY easier when you split it up between 2 swims vs just doing a huge single session. 6k this morning, mostly with Mark. Felt fine. Then tried to run and didn't feel fine. It wasn't an energy thing as much as it was a diaphragm cramping issue. So that sucked. Went back to the pool in the later afternoon and swam another 4k. I wouldn't say I felt 'great', but I think I'm coming out the other side of the fatigue b/c I felt about as smooth and natural as I've felt in a long time, right from the first stroke. Once again I was stoked to come home and log my 10k... thinking for sure I'd gain on everyone with that! But dammit if Larry and Jeff both also logged 10k today. And Lindsey logged 9. So I'm still 3rd. What's crazy is that 2 other swimmers logged 6500-7000 and it's like that's not enough to even factor in the game. Freakin' NUTS. Now that I've figured out how to manage the doubles though, I think I can swim like 60k+ next week. 10k split 6/4 isn't that hard and I think I can do that 3-4x next week for sure. Up tomorrow- long ocean swim with a couple of badass friends. 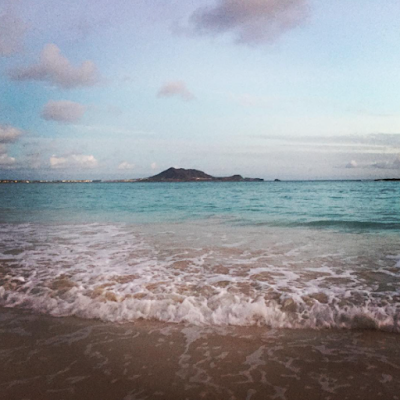 Day 6: Long ocean swim with Mark and Stefan and Hudson today. We basically did a 3 hour tour of Kailua Bay. Conditions were good today and I felt like I could have swam all day long. I stashed some donut holes in the bushes at the boat ramp and we stopped twice to munch on those and drink some fresh water. Fun fact: donut holes are ah.maz.ing in the middle of a long ocean swim. Hudson's garmin called it 11.3k. Stefan's called it 11.5k. Mine called it 10.8k. I logged what mine said. I don't know yet what Larry and Laura and Jeff swam today. They haven't logged in yet. But whatever they log will largely determine my plan for tomorrow. 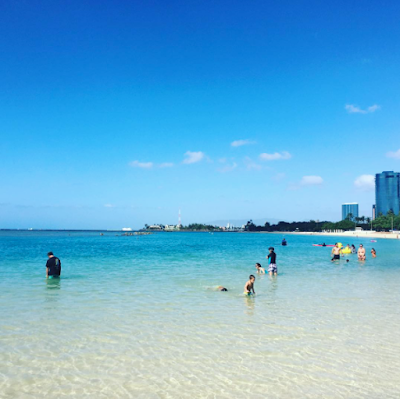 Day 7: Lindsey logged 14k yesterday. That was a big mental blow when I saw that. I paced about and stressed and tried to come up with a plan to combat that but honestly I just wasn't sure I was up for it? I sort of felt like a zombie this morning but I gathered up everything I needed anyway and headed to the beach today thinking I'd give myself a chance to answer it. I was okay through about 90min then my brain started coming up with all sorts of reasons why I should stop (pick a reason, there were so many) and what it came down to for me is that my WHY wasn't strong enough. 7k into my swim I was on the beach refueling and drinking fresh water and trying to think of a reason to get back in and do it again. Winning a contest on the internet wasn't a good enough WHY for me today and I bailed on the rest of the planned swim. Part of me felt like a loser for sure, because I just chose to stop. It wasn't a physical failure as much as it was a mental one. (i.e. I went for a short run after I was done with that 7K, because running sounded more appealing than swimming at that point!) I think there's a good lesson in there somewhere... about having a really solid WHY when you're doing an event that is going to cause mental and physical fatigue. You need something to grab onto when your brain starts giving you all the reasons to stop. Anyway, I came home and logged my 7k only to see that Lindsey and Larry both logged 17k!?! Once I was able to close my jaw, I actually felt an immense sense of relief. Relief that I didn't kill myself for 14k today b/c I would have been crushed to come home and see that 14k wasn't enough. Now I feel like the pressure is off me and I can go back to a solid but more reasonable amount of swimming and instead just get out some popcorn and watch those two HAVE AT IT!

I'm not sure there's a great reason to keep up blogging about the challenge for the next week, because I can make the call now that I'm done competing to win it! I Fold. All I'm going to do this next week is swim my 5K/day and I'll add back my bike and run so I'll be training in a more normal way, which doesn't exactly warrant a long blog post. But in conclusion, I'd say I'm glad I played to win in this first week. I gave it a shot but I'm in no place to compete with a 31k weekend like what Lindsey just pulled off. Originally I thought it was going to take 100k to win the game... Now I revise that and think it'll be 125k. Maybe more?? I'll have fun watching Lindsey and Larry play that poker game! I won't envy them next weekend though. If they both swam 17k today, what are they going to do next Sunday which is the last day!?! Shit! I'll get some popcorn.
Posted by Michelle Simmons 1 comment: