The ocean is like a box of chocolates.
You never know what you're going to get...

I've lost count of how many times I've done the Double Roughwater swim? Maybe 8 or 9 times? (edit- I looked it up- I've done it every year they've heard it since 2006, so this was my 9th year!) I can't remember. I think I missed one year, and then last year they didn't put it on. I can't remember why? Maybe because there were shark attacks like every week through the fall so no one wanted to swim in the ocean. Anyway, most years since 2006 I've done this 4.5 mile swim in December.

I was glad to have this swim on my calendar this year because it gave me a nice goal to focus on when I couldn't run for 3 months. I've been pretty consistent with my swimming recently. Most of the last 2 months I've swam 16-20k/week. 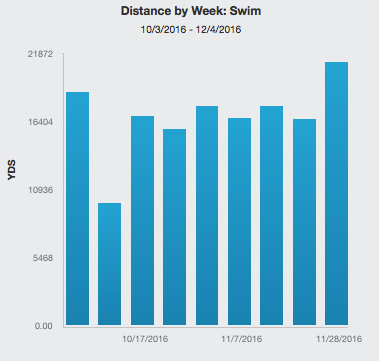 It seemed like we had decent conditions this morning. Light winds means the water is glassy and that's always quite pleasant! 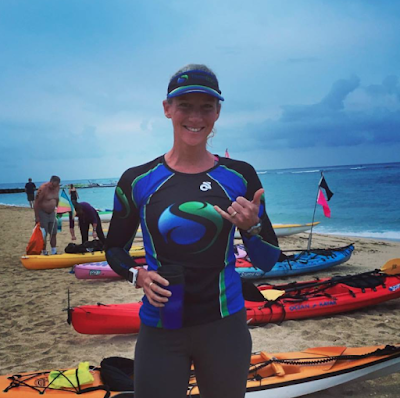 The race director describes this race as an "Equal Opportunity Swim"... meaning if there's a current (usually there is), we get to go against it one way and with it the other way. He also describes the ocean as a potentially dangerous place, with "big fish and things that sting". He finishes every pre-race talk with "If you have any concerns, don't swim." I love that.

Anyway, we each have our own individual escorts and once again, Scott was mine. The fact that we have done this together so many times before allows me to feel super confident. He knows where to be (in front of me and slightly off to the right) and who to follow for the best line, etc. We heard there was a head current going out so we decided to try to take an inside line on the way out. I think we did a good job of that, but yikes that current was still legit. At times I'd look at the bottom and see that I wasn't really moving forward. My strategy in scenarios like these is to not look at the bottom. :) I just keep swimming as strong as I can and trust that eventually, at some point, I'll get to the turn-around marker. I felt like I was swimming very strong and knew that there was nothing else I could do to move along any faster, so I just sort of tried to not think about anything other than meditating on my stroke/effort in each moment. Eventually that channel marker buoy did come into view. I made my way around it then stopped for a minute or so to down a Honey Stinger gel and drink some NBS fluid.


Somebody shoot me I've become one of those triathletes who swims swim races with her garmin. Blame my desire to upload everything to Strava... lol 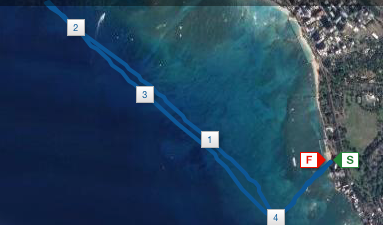 When I was stopped I saw that there was literally NO ONE swimming near me. Scott said there were a handful of swimmers pretty far ahead, and everyone else was sort of far behind me. I told Scott that I was good and started swimming again. Immediately I was like WOW YES!! It felt like I was swimming on a conveyor belt! Woot! I still felt really strong and like my turnover was good. The return trip went by a lot faster than the outbound and seemingly all of a sudden I was at the turn buoy that marks like ~600m to go. Getting in from there it got hard again and felt like it took forever, but eventually I stood up on the sand and jogged to the finish line. 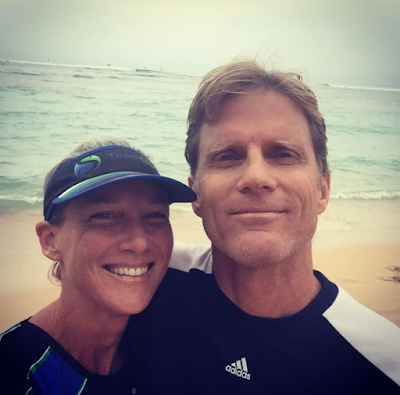 It was my slowest ever double swim at 2:13, but it felt like one of my strongest efforts. I was mostly stoked at how well I managed to stay focused and in the moment the whole time. Everyone else I talked to also commented about how it took longer than in years past. That's sort of how it tends to go with ocean swimming. Sometimes its fast and other times its slow. I won my age group and think I was 5th female OA? There are always some young gals who show up who just really are amazing swimmers. This year there were some folks from CA who showed up and made it extra competitive, so that was fun. Even then, it's a super relaxed fun kind of (Hawaiian style) competitive.

Anyway, so that's a wrap on the racing for 2016!
Posted by Michelle Simmons No comments: