This Needs To Be Exposed

I rode my bike on my trainer in my garage today. There are a lot of good/valid reasons to choose a trainer over the road. If you're short on time and just need to get a quality session done; If the weather outside is crap; If the session is quite specific and roads don't lend themselves to doing what you want/need to do; etc. Today, I'm conflicted to admit, I stayed inside because I was afraid to ride outside.

This blog isn't about recounting what happened to Lectie last week. But knowing that my friend is in the hospital having multiple surgeries to hopefully repair her legs after she was hit head on by some dumbass reckless drivers is the kind of thing that makes a cyclist think twice about the risk they take when riding outside on the road.

I've been a bit of a distracted mess these past few days. Trying to wrap my head around what happened, why it happened, what we can do to possibly prevent something like this from happening again? All that has led me down some rabbit holes as I try to learn about the drift racing culture in Hawaii. They're all over Instagram so what I've learned isn't anything that isn't out there publicly already... if you take time to look. It's shocking and scary and makes you scratch your head.

So long story short, these guys take pride in building up their cars to go fast and slide. That's about the extent I understand car racing. It's not my gig. But from reading their posts and comments, they're super into it and they take pride in having the best/fastest cars with whatever parts they need to make the car slide sideways or whatever. Apparently it's a thrilling feeling to be sliding around on mountain road switchbacks, and the best road for that on Oahu is, of course, Tantalus.

Wanna see what they do? Watch this video. It was something like this that took Lectie out last week. Absolutely tragic.

I've read through tons of IG posts and comments trying to get an understanding of where these guys are coming from... thinking that if we understood what was important to them, maybe that's how we could come up with a solution to stop it. What I've learned is that its going to be really tough to actually stop these guys. This comment made today on Facebook from a woman who lives up on Tantalus.

These comments made the day after Lectie was hit... Ha ha! Ya. Go tonight! What a great idea. 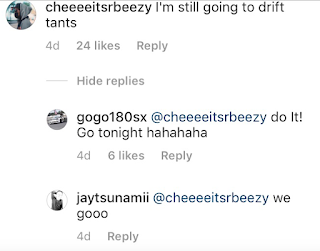 What's interesting to me is that they really do assume that 'everyone knows' that Tantalus is the road for drifting. And I'm sitting here thinking how did I not know? I've been riding my bike on that road for 13 years and I've never seen them up there? So while I guess maybe everyone in their community knows, not everyone actually knows. And even if they did, that doesn't make it ok for them to turn that road into a life threatening place at their whim. 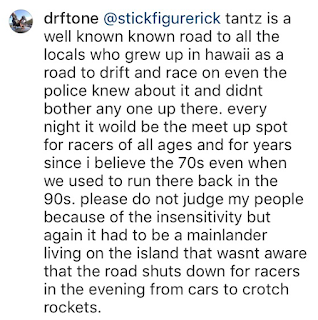 They're not remorseful. They seem to think its funny? 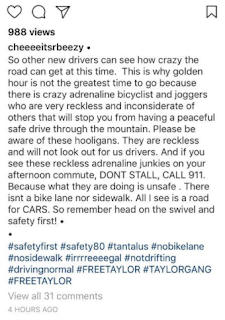 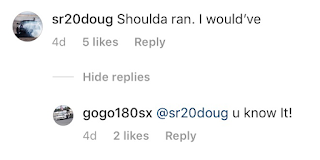 The fact that it's illegal for them to drift is not a deterrent. It's part of the thrill. 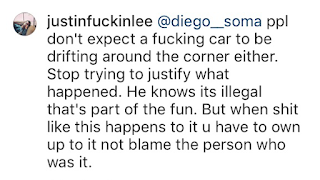 Of course the first thing a normal citizen would think is Where are the police?? Get the police up there to patrol the area that will stop the problem. Or. maybe not.

Or maybe they do sometimes get stopped by a cop. But nothing happens. 2nd time this week you got stopped? No worries. Cop probably slides too thats why.... I know this one is tough to read, but its an IG post where the guy brags about how the cop saw him sliding and let him off. 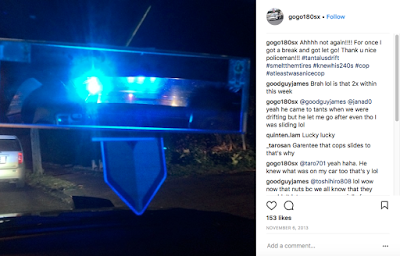 So what to do about this problem? Cops won't stop it. Killing someone won't stop it. The only way to stop it would be to make that road less appealing to them by installing speed bumps or centerline barriers or something along the sort. That's all I can think of anyway. 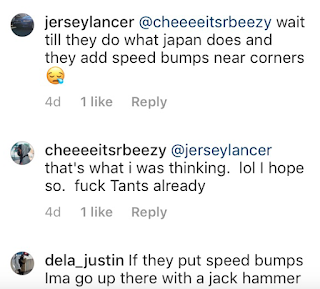 Even if we manage to make Tantalus unappealing to them, they'll likely just go look for somewhere else to wreak havoc. Here's a video one of them made. He's clearly super proud of their activities. This was from less than a month ago... on the most major highway in the state. Why these guys are still on the road in a civil society is beyond me.

Posted by Michelle Simmons 7 comments: Links to this post