It seems like more than a week has gone by since I did that little swim meet thing... but really it's only been a week, so I guess still within the window where I can blog about it??

Swim meets are not a big deal here in Hawaii. While there are a ton of really great swimmers on Oahu, most (me included!) prefer ocean racing vs diving off a block and sprinting for dear life. Consequently, we only have a few opportunities each year for this kind of event, and even then, a total of 9 swimmers showed up! That made warm- up pretty nice and relaxed. :) 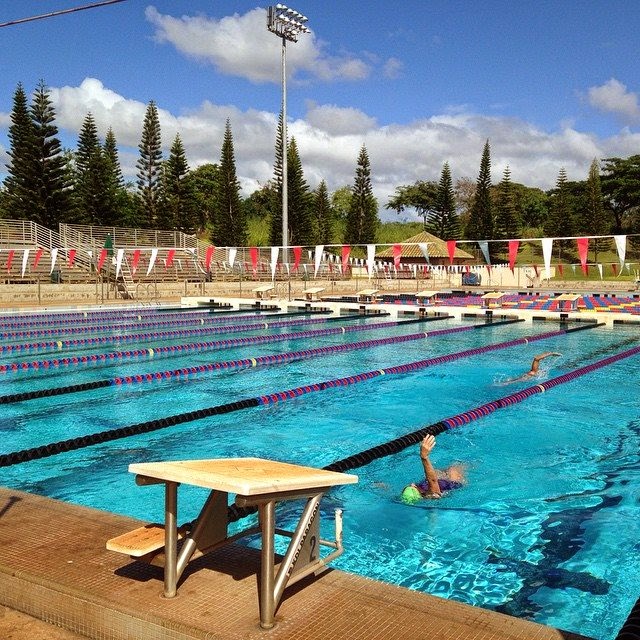 Anyway, it was fine with me that this was a low key event b/c I had my own fears, mostly about keeping my goggles on when diving off the blocks. The fears were not unfounded as I spent the bulk of the warm-up period trying unsuccessfully to get a decent start without ending up with my goggles around my mouth. I tried 3 different pairs and finally found success with a pair I'd borrowed last month from Nalani. :)

Since it's been a whole week, my memory of how painful these events were to swim has faded, and I'm positive that I could go back and do them all better given another opportunity! :) That's how our brains work, no? Somehow my brain also 'forgot' about the 20 years it had been since I'd last raced a swim event in the pool with swim meet type intensity, which is simply not the same as what we do in training. I swam a couple of 25's fly off the blocks in warm up just to feel it and was like CRAP that was hard how am I going to make it through a whole 100?

First event for me: 100 Fly. The 100 fly was my favorite event in high school and I remember 1:03 as my ability back then. For whatever reason I ASSumed I'd still be able to knock off a decent split for that just like I did when I was 17... I'm laughing right now as I type that b/c it is clearly so naive but whatever. I got through the 100 fly ok... asked the timer gal at the end what it was, thinking maybe she'd say like 1:08 or 1:09... she said 1:13 I had to ask her to repeat that... WHAT?! Yikes. So a week later I look back and think well I only really lost like 1/2 second per year over the last 20+ years so that's not so bad, right? Trying to make myself feel ok about that, and really it's fine. The state record for my age group prior to that was 1:16 which I thought was crazy slow (for a state record?!?) but now I'm thinking that most people, by the time they turn 40, are smart enough to retire from attempting 100's fly. That's how I find success though- not through actual talent but rather through tenacity and being willing to attempt things that maybe others aren't willing to do. :) Next year though I'm going to rest more into this meet, be more aggressive on my start, and knock that record down <1:10.

The other events I didn't care about much at all, but swam the 500Fr, the 50 fly, and the 200Fr. All similar stories~ shockingly slow based on what I remember being able to do 20 years ago~ but clearly my memory is warped a bit. In the end I'd say this meet was super fun and definitely WELL outside my comfort zone which is a legit reason to go back and do it again next year. Next year we'll work harder to recruit more swimmers too! This is the motley crew who showed up this year! 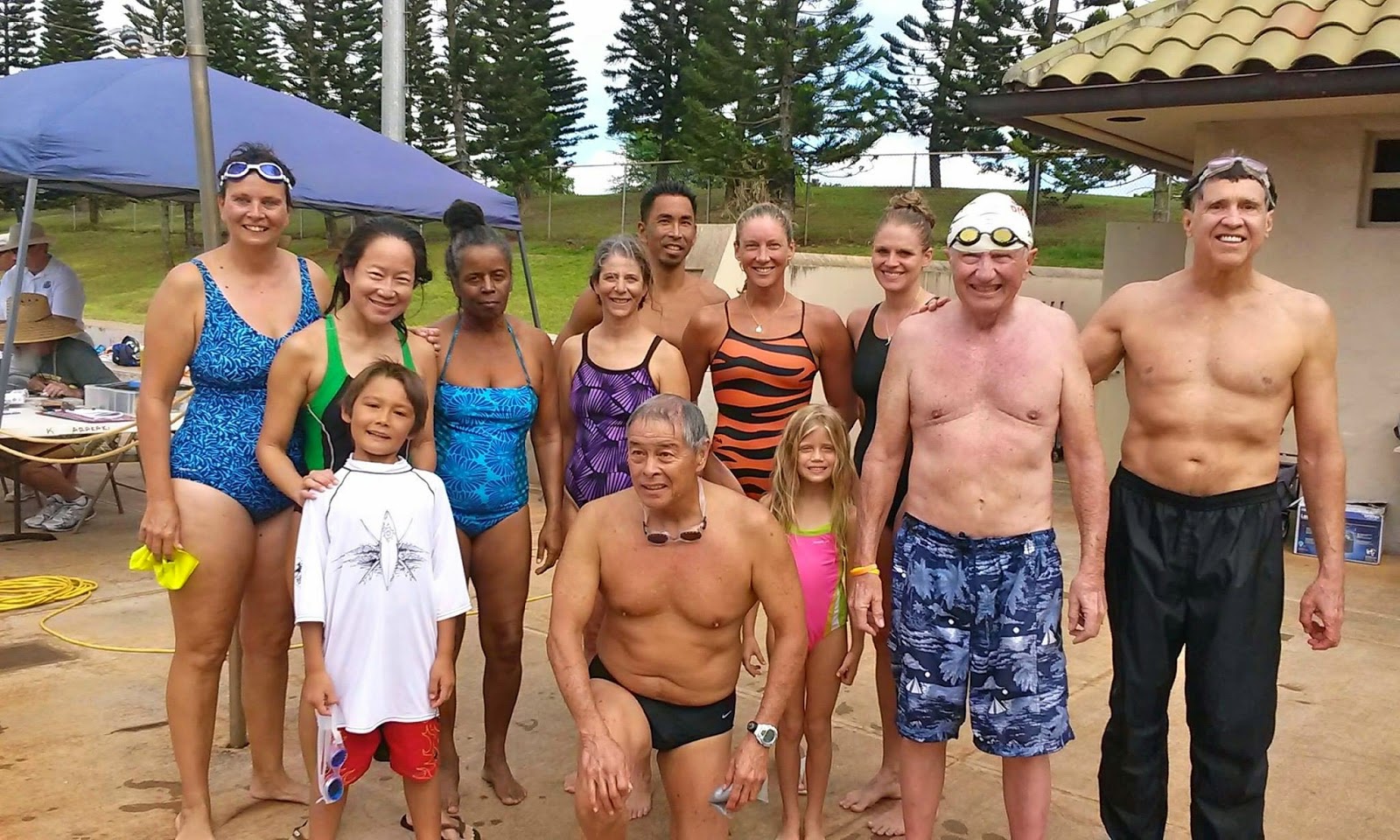 Moving on. I've actually been swimming quite a bit recently, mostly in prep for the Double Roughwater Swim which I do every year. Have been joining in with a group of strong ocean swimmers on the weekends which has been REALLY fun. I actually don't have a lot of confidence that I can swim with the gang I've been swimming with, which I suppose is funny... but another plug for those Roka Sim Shorts- when I wear those they make swimming a bit easier and I go a bit faster which means I can indeed hang with this gang for as long as I want which is confidence boosting... so yay sim shorts! :) Last weekend it was a gorgeous Sunday morning in town and we went shark hunting... found 3! 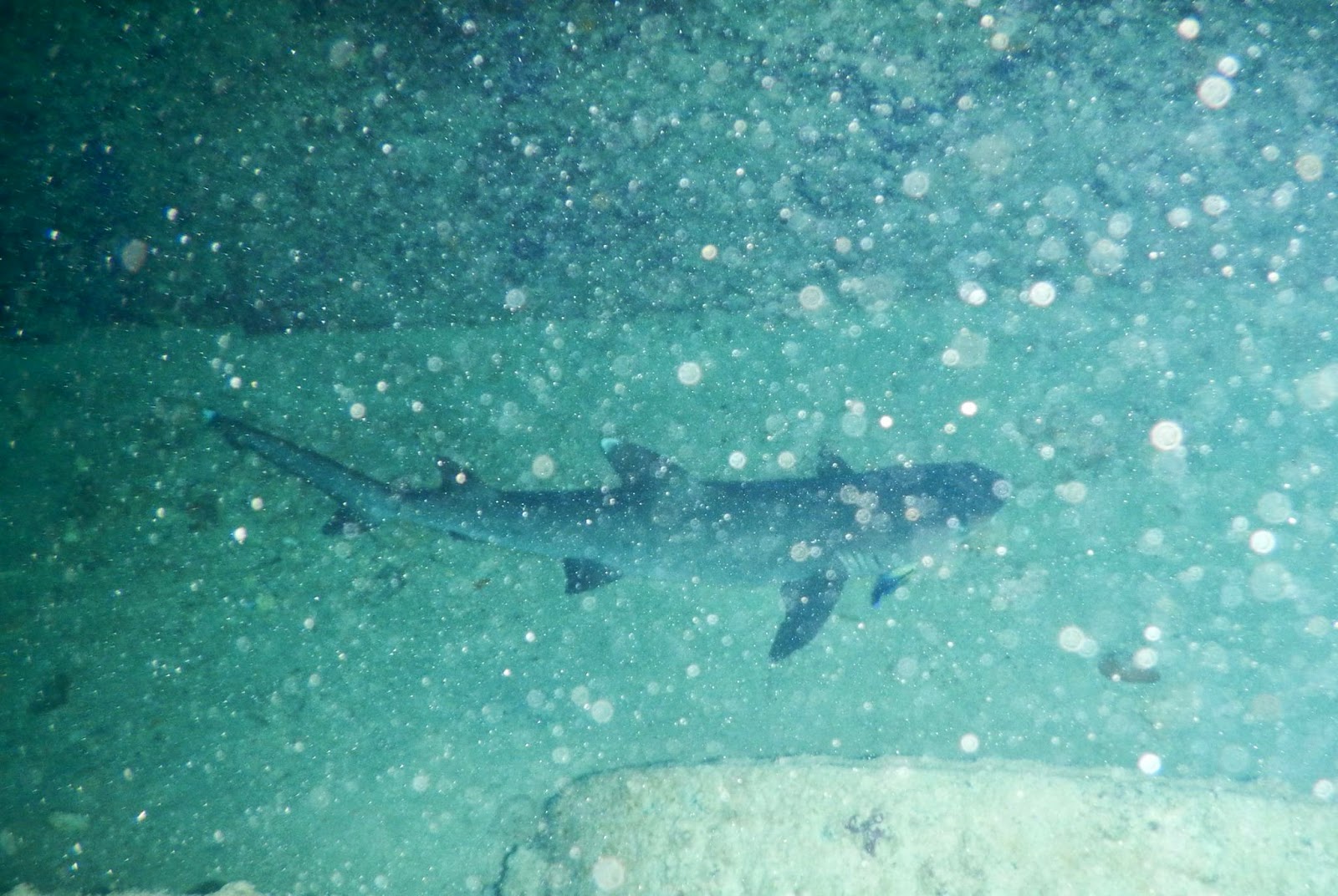 Then we swam out to the channel marker buoy and climbed up on it which just made us feel goofy. But it was a great day. 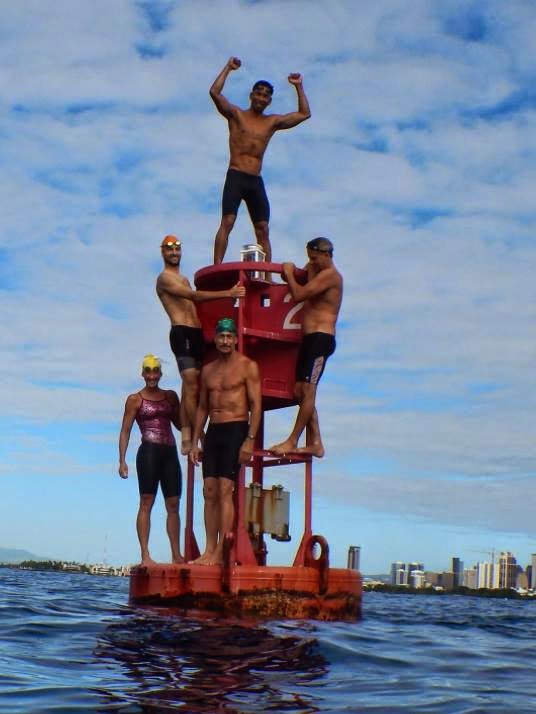 This past weekend a similar group got together for a long ocean swim on the east side. Usually wind comes from the east so east side swims are super choppy, but Saturday was another no-wind day so the ocean was as nice and calm as ever... We set out to do a long-ish swim around Kailua Bay but as always the plans were fairly loose and we were sort of making up the route as we went. 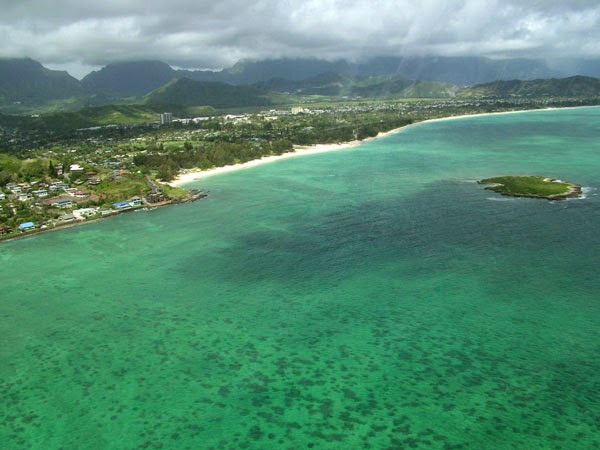 Our start point was sort of at the top of this picture (above) and our first goal was to get around that Flat Island and back... But we got to the back side of Flat Island in ~35' and decided that wasn't long enough so we kept going to Lanikai Beach and figured we'd make a call about what to do from there. It was only ~15' more to get to Lanikai. So we were 50' in and "group think" with 8 swimmers made coming to a decision about what to do a bit of a challenge. Lectie and I were ready to head back the way we came which would have given us a respectable ~7K swim, but a few of the more hard core swimmers were enticed by the idea of going out to the Mokes... which would add ~an hour to our already long swim... Um, well... It was true that the conditions were picture perfect and this is where we were looking at going so we kinda shrugged our shoulders and said OK let's go! And off we went. 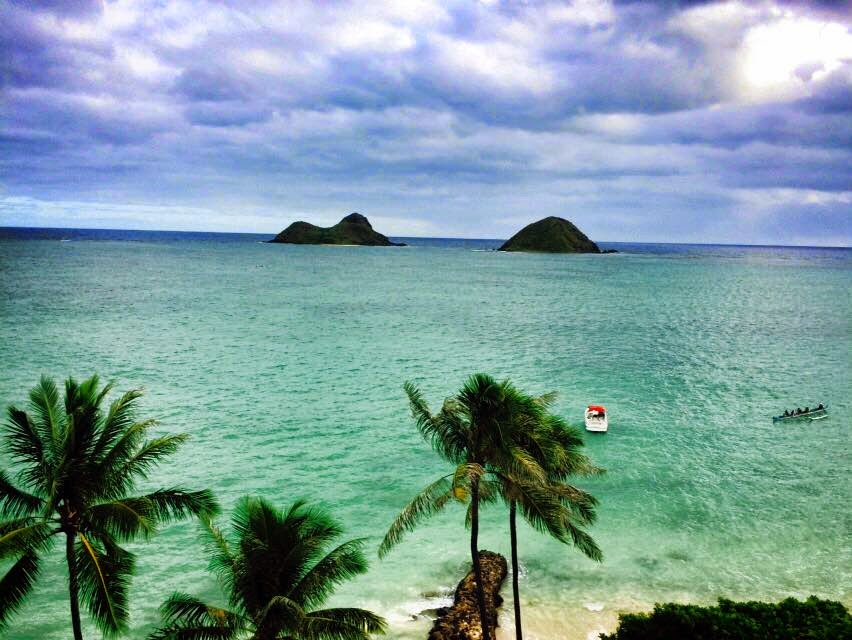 Swimming out to the island was just as nice as any swimming anywhere could be... we saw several GIANT turtles and once we landed on the island we saw some friends and a monk seal which was cool. Of course then we were facing the daunting task of swimming back to where we started. We didn't have an escort or anything with us and we were starting to get thirsty so we decided rather than swimming straight back, we'd take  break at the boat ramp where we could drink some water.

My 'low point' came from ~1:40-2:00 into this swim as we were trying to get to the damn boat ramp and I had that quote from The Albatross in my head Water water everywhere but not a drop to drink... Started to get a bit pissy and couldn't really talk to anyone just get me to the damn water fountain already... Funny how quickly a mood can deteriorate when one becomes FIXATED on needing water. So after ~2 hours of swimming we finally landed at the boat ramp and rushed out to the showers were I just stood with my mouth open letting the fresh water rush down my throat. It was glorious. Of course then we were all quite tired and thinking about just walking the 2 miles back along the beach instead of swimming... by this time a ton of beach goers were out in the park BBQing and the food smelled SO GOOD (cruel, really) and then this guy went walking by with a case of root beer and we all just gazed longingly at that root beer thinking it looked like some sort of nectar of the gods...

Just as we were about to take off we heard our friend Marcy calling out to us "Hey you guys want these donuts?!?" Like an angel from heaven, Marcy showed up with a dozen Krispy Kreme donuts and offered them to us! I think we all just sort of closed our eyes and let that sugar melt in our mouths. A donut has never actually tasted better. Poor Brad was already in Bonktown USA so he ate 3 of those things before he could even take a breath... But as you may know, sugar can be a magic mood booster in a scenario like this and those donuts allowed us to get back in and swim the final stretch across the bay... For many of us this was in the area of longest swim ever but it felt great to finish and then Ryan's wife Bonnie had prepared this absolutely amazing brunch buffet for us all. I would have taken a picture but we chowed it all down too fast!

Anyway, this kind of training is so much fun... Lucky we live Hawaii! And that we can find so many awesome friends who like to do what we do...
Posted by Michelle Simmons 1 comment: Links to this post