I don't know how you're feeling but man I feel like days are just flying by now. Like all of a sudden it's 5pm and I'm like how did that happen?? Must be because we're having so much fun. ;)

I actually feel like I have more to do now than normal, but it might just be that some transitions are still taking place and such. I can say I DEFINITELY have more dishes to do now. Holy cow. I try to be pretty positive and not dwell on negative things but last night I did start to lose my patience and just flat out told Scott and Moana to put their damn dishes in the dishwasher. I swear every.single.day they make every.single.meal and leave every.single.dish on the counter and I suppose if that's my biggest gripe about this shelter in place situation then I can count my lucky stars. But sheesh.

Speaking of lucky stars... ⭐ Yesterday I officially declared Moana to be TeamBSC's new administrative assistant. She likes her new title! Her first task was to figure out how to make a graph where we could display the stars that TeamBSC athletes are earning this month for hitting ALL TIME PEAKS. Francesca got one yesterday and Heidi got 2 today so we're off to a good start! I figured a graph showing numbers going up in a positive way would be a nice respite from other graphs we're all seeing every day where we don't actually want to see those numbers go up... Anyway, Moana had not actually had any experience yet with Google Sheets but she fooled around with it for a few hours and got it figured out! How cool is this?? 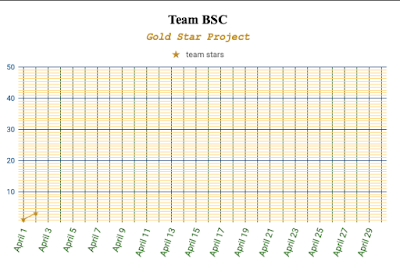 She's projecting that we might (as a team) accumulate 50 stars this month... I'll post it each week so we can watch our progress! I've spent 4-5 hours the last few days combing through everyone's files trying to edit out erroneous garmin data that shows false peaks (#fakenews!) I don't think any running peaks/PRs should be counted when done on a treadmill. I mean, treadmills are VERY useful tools, yes, but garmin does a crap job of measuring pace on them so all the peak paces that showed athletes running 3min/mile got deleted in the last few days. Also, sometimes garmins go crazy and spike up to 3000w in the middle of an easy ride- those peaks all got deleted too. I think in a big picture sense, running peaks will be harder to hit than short distance riding peaks. MOST of the running peaks I combed through the last few days were from races. Its hard to hit peak running paces when not racing, but that doesn't mean some folks won't try! Honestly the beauty of this gold star project is the trying part. It's all about the journey, as they say. I look at some of my short distance running peaks (mostly from 2012, but a few from 2017) and think they're way out of reach... but I suppose that's the beauty of this project... and why it would feel so amazing to even get in that ballpark again!
Posted by Michelle Simmons