When I was a freshman in college (at University of Hawaii), I lived in a little dorm room (Johnson Hall B, baby!). I had a really great roommate from Kauai. This was 1992 (I'm aging myself, yes!) so internet was only just sort of becoming a thing. I didn't have a TV. I didn't have a computer nor a cell phone. How did we even survive? Can you imagine? Lol. Somehow though, we managed. I even had a social life! It was called, go to the one bar that most of my friends would go to most often and see who else might happen to be there. That was our social life. If we needed to communicate with each other, we used landline phones and left messages on answering machines.

One early morning I remember hearing a really loud siren... over the public emergency broadcast system. I don't have a great memory of a lot of past events, but I have some vivid memories of that. It was a Friday morning, around 4AM. Someone went running down the hall shouting HURRICANE IS COMING! HURRICANE HITS AT 4! CLASSES CANCELLED!

I was from Ohio and honestly didn't really even know what a hurricane was, but I remember feeling somewhat grateful that classes were cancelled, because I was kind of hung over.

With absolutely ZERO understanding of what was coming, we did all the dumbest things one might think people could possibly do in that scenario. I remember watching one of my friends get on the bus with his boogey board. I was like, "Where are you going???" He replied, "To the beach! Surf's up!" The rest of us headed to the store and got cases of beer and spent the day drinking together. Things get a little fuzzy in my memory around that, but I do remember that night being outside as the wind was ripping and it was DUMPING rain and the street outside my dorm had morphed into a raging river and we danced outside in that rain and honestly I remember it being super fun.

The next day, I remember my roommate being super upset. She told me that the restaurant she used to work at on Kauai had been flattened by Hurricane Iniki. That storm brought winds of 145mph and damage to the state of over $1.8 billion. 14,000+ homes damaged. 6 people died. Meanwhile, I was the dumbass out dancing in the rain. 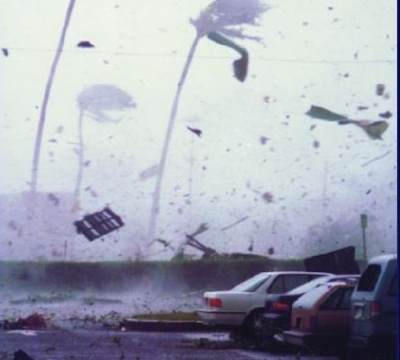 Knowing what I know about hurricanes now, my/our behavior that day was ludicrous. Having full access to news and such now (pick a source! There's access to news everywhere.) I know that they warn about hurricanes coming 24/7 for at least a week before the hurricanes get anywhere near our islands. That day in college, the first I'd heard about any hurricane was when the sirens went off. Seems crazy now, but that's the difference between paying attention to news vs not paying attention to news.

I share this now mostly bc I suspect that even though access to news these days is abundant (for most of us), I suspect there are a lot of people (young people especially) who actively disengage from the news. Shoot, our own president* has tried to drill it into our heads that any news we don't like is #fakenews. Given that backdrop, is it any wonder that we're having a hard time coming together and acting collectively as a society to combat a pandemic virus?

Whenever I read comments people make about this whole thing being over-hyped, my first thought is that they do not watch/read the news. I suppose it's possible they just watch different news, because for sure there are some networks that were actively downplaying the threat of this virus. I think a lot of that has stopped this week, as the death toll across the country continues to rise (and that's hard to lie about). Even then though, watching the news at all has become an act in critical thinking, because there is a ton of bias. Trying to figure out who is telling the truth vs who is exaggerating for effect vs who is just straight up lying to cover shit up is one of the major challenges of our times. Given all that its really no big surprise that many people just tune out the news altogether. That is a big systemic problem in our fight against this new virus.

I suspect that in hindsight, some people might view their actions during this pandemic differently than they currently view them. I can say 100% that I view my actions during Hurricane Iniki differently now than I did then. #themoreyouknow