We are home after a full week in Kona and the washing machine is working overtime. I took just about all of my sports bras and running shorts over there and put them to good use! 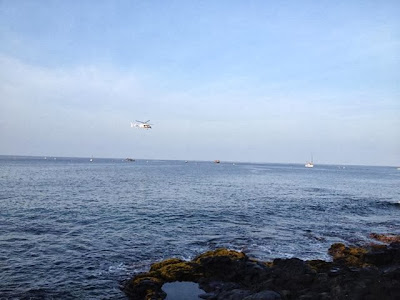 So the race was super fun to watch. I'll be honest though- last year I was not the slightest bit jealous of the athletes racing. Partly b/c I knew I was not fit enough to pull off a decent Ironman but mostly b/c the windy conditions last year were just going to make it a brutal day on the bike and I'd trained in that enough to know that racing in it just simply wouldn't really be very fun! This year, however, was a completely different story. First off, I think I am currently fit enough to pull off a decent Ironman and race day conditions were the best I've ever seen there in 9 years... I knew it was a PR type day and I was just salivating wishing I could be out there myself. After a couple beers though I was capable of putting my jealousy aside and cheering like a maniac. :)


Xena and Leanda running together at mile 2... 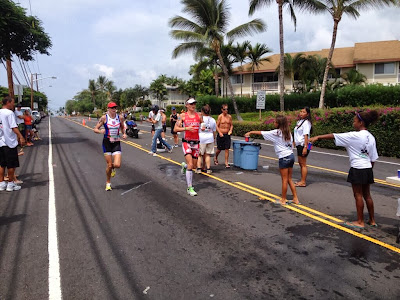 I've been a more serious fan of the sport in the last few years and have followed more closely the careers of many of the top pros. It's easier to do now with social media and blogs, etc... Possible to feel like you can get to "know" the pros a little better now which helps me pick my favorites. I do think pros do themselves a disservice by not (honestly) putting themselves out there. It's kind of part of the job description I think these days if they want to have fan support and also be supporting their sponsors, etc.

I paid a lot of attention to pre-race interviews and then consequently how athletes performed on the day. Couple things I found interesting... Those who came across as being the most cocky and sure of themselves pre-race actually had the worst days. Those who came across as a bit more reserved with a "we'll see" attitude seemed to, for the most part, do better. Several of the seemingly most confident athletes were actually hiding injuries. And the ones who appeared the most wafer thin ended up with DNFs. There's definitely a balance when it comes to race weight- the top pros were certainly not carrying any extra weight but they also didn't look gaunt and skinny like a few of the pros who actually DNF'd. Last year I remember thinking that Rinny looked skinny as a rail. This year, while it's not like she was carrying even an extra 1/2lb, she didn't- like last year- make me turn my head and think YIKES has she not eaten in a month?? And look how much stronger she was! It's just confirmation to me that thinner is not always better. There is a point where it is significantly worse to be too thin. Anyway. GREAT race for many of those athletes! I remember watching Rinny run at mile 2 and thinking She is running faster than the men! And sure enough, only 2 men outran her. Simply amazing.

With Cozumel 7 weeks away (or is it 6? I've lost count), the week was an ideal time for a little personal training camp and the location couldn't have really been better. I always get super motivated to train in Kona, and when I'm seeing super fit athletes everywhere it just compounds the positive energy I already feel. I knew I would feel good over there so I requested a meaty week from coach and he gave me one! It was one of the most solid weeks I've ever pulled off and honestly, I surprised myself with just about every session going better than I anticipated. Some solid work got done and I couldn't be happier! I also taught myself some important lessons this past week... The #1 lesson was about how our brains dictate how we physically feel at any given moment. Since I had decided before I even got on the plane that I was going to feel awesome all week, it's no surprise that I felt awesome all week. :)

The #2 lesson I learned over the weekend is that fear is a huge motivator to swim faster than you normally can.

So the highlight of my year week was the swim I did yesterday morning with Hillary Biscay. She is training for UltraMan (Thanksgiving weekend) and wanted to get in the whole swim, which is ~10K (slightly more) and without really thinking it through, I begged to tag along. In all honesty I didn't give it a ton of thought until I was in the car driving over to meet her at the pier... All of a sudden I kind of had a holy shite what am I getting myself into moment. But that passed. I had a couple of gels and my cap/goggles/sunscreen and that was all I really needed. A gal was supposed to meet us there as kayak support but she was a no show... I mentioned to Hillary that I wasn't entirely sure I knew exactly where Keauhou Bay was (our finish) b/c I'd never finished a swim there... I'd been there several times but just wasn't sure I'd recognize which bay it was. She laughed and said she didn't really know either but we'd figure it out. Ok then! I tucked my gels into my suit and off we went. The first ~20' was a fairly relaxed pace- I felt good swimming and could feel that we were moving right along but it didn't feel hard. Then she started to pick it up so I got on her feet and just forced myself to stay there. I felt like I was racing an ironman... at times maybe even 1/2IM race effort. I can't track time at all in my head while I'm swimming in the ocean but after what seemed like forever- in reality after 75'- we finally stopped for a gel. I had a chance to look at the coast line to figure out where we were and guessed we were already more than 1/2 way there b/c I saw we were already past the TYR house, which I'd run by enough times through the week to know it was ~Mile 3 on Ali'i Dr. Wow- I calculated that we were on 2:30 pace. Yikes. And it's not like Hillary is known for slowing down... we were stopped for I'd guess less than a minute then right back on it...

I had so many thoughts of just wanting to slow down and stop working so hard but if I did that I would have been all by myself out there in the ocean and that was less appealing than simply continuing to WORK so I kept on the gas the whole damn time every stroke. Once or twice I lost concentration and would be slightly off the back and then I'd have to SPRINT to get back on so I really tried to not let even the slightest gap form... Had to balance that of course with avoiding touching her feet... I accidentally touched them a couple times but doing that was like pressing the accelerator button b/c she would speed up and I was like NOOOOOOOO as I was sprinting to stay on and avoid certain death. Anyway, we stopped briefly again for a gel at 2 hours and looking at the coastline I guessed we were at about the 5 mile mark so only ~1.2 to go... still on 2:30 pace. Head down back on it- next time we stopped was almost 30' later when we saw a kayaker and asked where Keauhou Bay was... oh back there, he pointed... HA! We were on our way right past it so we turned around and headed back into the bay with the docked boats. And honestly, as soon as I could see those boats and knew I wasn't going to die alone in the wide open ocean, I completely shut it down and cruised in easy easy... backstroke and breaststroke trying to shake off the effort of that 10K. Funny how once my fear was gone I couldn't force the pace anymore. Afterward I sent Nalani a text and told her I'd be a faster swimmer if I was more afraid that she'd just leave me out in the open ocean if I didn't hold pace. Lol.

Anyway, back home now and I woke up this morning feeling like I'd been hit by a bus! The fatigue has set in. Time to chill out and recover for a bit...
Posted by Michelle Simmons

Fastest I've ever swum was when I was scared of being left in the middle of the Bay. It works.

Glad you got in some great training in Kona. Again, so nice to meet you and I did hear you yell at me on Ali'i when I was running - thanks! We had a nice day in Kona (and I have never said that!). There is still something very hard about Kona, but it was a great day for many. Tell Moana that I still have her pic she drew me and I brought it all the way back to Chicago!

Keep on training hard for Coz - you are next!

I'm so sorry I missed you there Michelle! It's always so so crazy! Thank you for cheering for me and all the competitors and many, we did get lucky with that day! It was just awesome! Best of luck as you train for Coz!! I know you will do well!! I just saw your other house post too!! Exciting!!!! Whoo hoo!!!