Local Sprint Triathlon #2 of the year was this morning... The Lanikai Triathlon. This picture was from last year when the weather was perfect and calm.... Unfortunately our winds were up this morning so the swim was not nearly as calm and easy as this picture makes it look. :) But still not a bad place to hold a triathlon, huh? 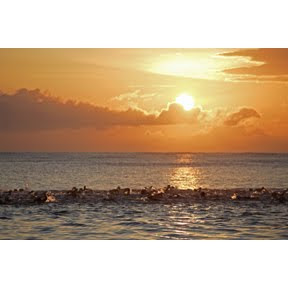 Looking back at that picture from last year makes me pine for the warm weather and sunny skies we had last spring. It only sprinkled on us briefly this morning, but it was quite cold (ok ok I know I'll say it again it's all relative blah blah blah but we were all dressed up in fleece and had goosebumps so give me all the crap you want about how it's 35 and snowing where you are but we all live here for a reason and that is that we want it to be warm and right now it is not so give me a break, ok? ;) and the wind was howling. Nothing new for us this year but I do think it would have been nice to have the perfect weather we were spoiled with last year.

Women and relays started 3 minutes back from the men... I had a rather uneventful swim. It was fine. Nothing stellar to write home about but solid and fine. I did not have quite the cushion I normally have coming out of the water, but whatever. It was a short swim and I was out in 8:52. 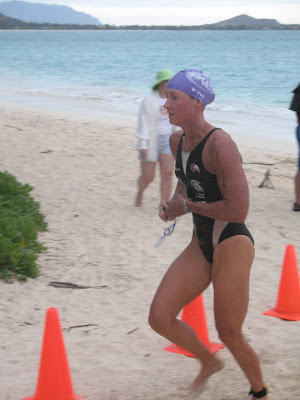 I was being chased by this woman... Ingrid. Though I'd seen her name a lot in race results, I did not actually meet her face to face until this morning*. I knew she was very fast (um, used to race pro!?!) so had no illusions of beating her, but I was curious as to how long I could hold her off. Unfortunately I only had about 40 seconds on her after the swim, which did not bode well for me, though luckily I did not know it at the time. :) How hard would you bike if you knew this woman was chasing you down? 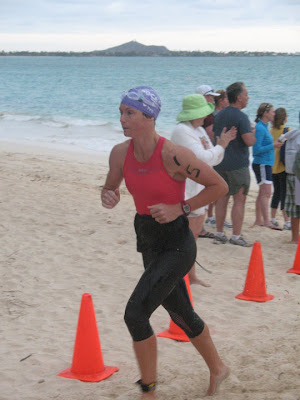 Pretty darn hard, that's how you'd ride. Well, that is how I rode anyway! It was crazy windy on the bike and there were a ton of men to weave through, but for the most part I achieved my goal of focusing and pushing the whole time... and I found out later that I managed to put 2 more seconds on Ingrid! Holy cow. That really shocked me.

Onto the run. My favorite part, right? Lol. The thing is, while many of the other top women were running faster than me, I actually had a good run and am quite happy. I averaged 7:09 pace today, which is about as fast as I've ever run in a triathlon. And though I could not have run any faster (where's my speed???? Oh that's right... I don't have any. Lol.) I do feel like I could have continued that pace for several more miles. So that made me happy. Ingrid ran by me pretty early on in the run (before the first mile marker) but nobody else caught me so I crossed the line as second woman! (It helped that Rachel went to Molokai this weekend. Thanks, Rachel!)

My good friend and long time training partner and teammate, Sandy, came in right behind me for third OA. They gave us HEED as a prize. I've never tried it but am open to trying new products, especially when they are free. :) 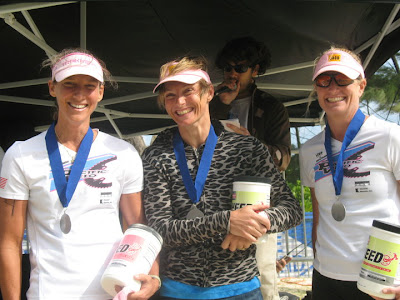 In the end, I decided that I really need to stop beating myself up about my run. It's hard because I want to be racing among these top women and they ALL run faster than me so naturally I beat myself up about that. But the fact of the matter is that every time go out I'm getting faster so clearly I'm doing the right things so I just need to keep doing what I'm doing and be patient...

*I have to say, Ingrid is awesome. Not just faaaast, but really cool too. She congratulated me after I crossed the finish line and was very complimentary about how hard she had to work to make sure she didn't give me too much time going into the run... Glad I could give her a good race at least for a little while! We actually ran the run course again together afterward (with Roz!) and chit chatted the whole time about all sorts of things. It's really nice and refreshing to meet a very fast athlete like Ingrid who doesn't pretend she is not competitive... who admits that she trains hard and takes it seriously... but yet after we cross the finish line we are all friends. Ingrid has a 2 1/2 year old daughter and we talked about getting together for play dates for our daughters... awesome. All in all just another great race! :)
Posted by Michelle Simmons

Well done! I love bragging to friends about my badass coach :).

WOW! You had an awesome race. And I think you should be super proud of that run! You may say that some women run faster than you, but you certainly can swim faster than everyone.

You are getting FASTER on that damn run! 7:09 pace... and you felt like you could keep going? Def. don't give yourself shit!
Great race! I envy your weather--except that wind. I hate wind, and you have so much of it!
Congrats again!

Awesome! Got to love hardware around the neck and an arm full of free stuff. :o)

Congrats Michelle!! Another great race! And I know how you feel about the run - I used to beat myself up all the time about my slow swim. I hated looking at the results and seeing how much faster everyone swam then me! But just like you said - if you continue to improve that's all that you can ask. So keep up the great work!!

Awesome race Michelle! Sounds like a lot of fun; like you say your run IS getting there...you wouldn't get as much satisfaction from effort and improvement if it came TOOO quickly, enjoy the journey!

if you were the fastest at EVERYTHING, that just wouldn't be as much fun. very cool that ingrid was nice too!

Congratulations on the race!!!

Of course she's cool, she is wearing leopard print!! Congrats on the race! Boy, if 7:09 is not fast enough and you felt like you could keep going...I am speechless, I won't say anything. Awesome race.

Awesome job! And another mom with kids to train with - sweet! You guys get such great stuff for winning races. All I ever get are plastic trophies. Everything is better in Hawaii.

Woohoo on a great race! You did awesome! And, you are FAST! I know you are a little frustrated about your run, but seriously, you are fast, hence the reason why you got 2nd place! :)

Congrats - what a great race!

Congratulations....sounds like you dug deep and hung on! Way to go!