On Being Tired vs Being Depleted...

Obviously I haven't written in a while, but that doesn't mean I haven't been thinking and learning and experimenting and assessing all things triathlon like I used to do. Writing out my thoughts feels more foreign now since I'm out of the habit, but maybe writing is like riding a bike? Let's see...

I feel like I'm starting to crack a code of sorts when it comes to long distance endurance performance in heat... Though sometimes FB memories come up and remind me that I've said before that I thought I had my cramping problem solved... but then it appears maybe its a moving target b/c as soon as I think that I've figured it out, I do a race and find out that actually, nope. Is this time different? I don't know. Maybe?

I've raced 2x 70.3s this year (Honu and Ohio). I thought I had a solid plan going into Honu, but it didn't work. In short, I started feeling twinges of cramping before even reaching half way on the bike (WTF??) so I soft pedaled in then thought maybe I'd be ok on the run but legs completely seized up on me (pick a muscle in either leg- it wasn't functioning) and the last 4ish miles of that run were some of the most painful hobbling I've ever done. It felt like another massive failure. Though I'll say that there was something different about that 'failure'... This time I knew 100% for sure that it was some kind of chemical imbalance in my body that was causing muscles to not function. It felt less personal, if that makes sense... Like, I 'failed' that race but not because I am a failure. It just became crystal clear to me that what works for other athletes (as far as fueling/hydration) doesn't work for me. I needed to figure out my own formula and nobody was going to do that for me. I knew my problem revolved more around hydration than anything else. It's not like I don't train for these things! My problem during Honu wasn't simple exhaustion from a long hard race effort. It was more like my body was depleted and that got me thinking about the difference between being fatigued vs being depleted.

I sort of lucked into a Kona spot at Honu, which in a way I was stoked about but in another way I was completely freaked out about. Like, can I keep enough fluids in my body to safely complete that distance anymore? I mean, not if I managed things the way I did at Honu. I needed a new plan for sure if I was going to attempt to double the distance in those same sweltering conditions. I felt desperate. I thought I'd taken 'a lot' of sodium at Honu. But what is 'a lot'? Is 300mg a lot? 500? 1000? I needed to define some things to get to the bottom of this puzzle.

I finally caved and did a basic (remote) sweat test via a company called Levelen. For a long time I'd suspected that my sweat was pretty concentrated, but what does that even mean? It means I horrify any good bike mechanic because all my bike parts corrode quicker than most people's bike parts, to start... But having some numbers/facts/data helps put things in perspective. To make a long story short, test results showed that I lose ~1250mg/sodium per liter of sweat when I run (~850/liter on the bike- not sure why that's different concentration?) and I lose ~2.3 liters/hour when jogging easy in not crazy hot conditions. So when you do the math on that, it works out to ~2900mg sodium/hour when I'm running.

Looking at those numbers, some things seemed impossible. Like, there has to be an upper limit on the amount of fluids one can absorb each hour. I think I've trained myself over the years to absorb more than many... But not that much?? Is there an upper limit to sodium intake then? Daily recommendation is 2300mg but if I lose more than that in an hour, what's my personal limit for an 11ish hour race? What are the negative effects of taking too much sodium? I genuinely didn't know, but I started experimenting. 6000mg sodium before/during a 4 hour training ride seemed to work well and I had no ill effects from that...

I went into Ohio 70.3 with an enhanced plan to take in even more sodium and my thought was that if I 'failed' that race because I took in too much, I'd be ok with that. I won't bore you with the details of a play by play of how the race unfolded, but the gist of it is this:

I started out the first 90min or so managing things pretty much exactly like how I managed things at Honu... Skratch Hyper before the race then after an average swim effort, onto the bike drinking standard Nuun/Skratch and eating bars and Skratch chews, as many triathletes do. About 20 miles into that ride I felt the same twinge of a cramp in my adductor that I did at Honu and the frustration started to mount. AGAIN??? But this time I had some options where I could experiment... A bottle of "The Right Stuff" on my bike (1780mg sodium) saved my ride. I started drinking that and within ~10 miles I had full function of my legs again and was able to push the way I wanted to push. So I finished that ride way stronger than I finished the Honu ride. 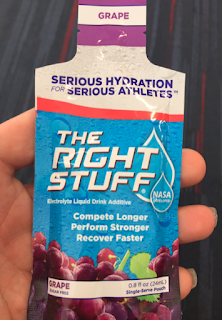 Another change I made was to take Gatorade at the aid stations vs water. I think many of us have been taught that Gatorade is the devil and to avoid it at all costs... at Honu I avoided Gatorade and took water instead, but once I found out the concentration of my sweat I decided that Gatorade- while maybe not perfect- is a better solution for me than plain water. In the end I calculated sodium intake on the bike to be ~3000mg. And while I felt some normal fatigue getting off that bike, I didn't feel like I was depleted. 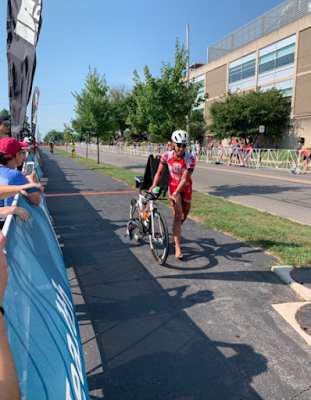 In T2 I'd placed a little cooler for myself with another bottle of The Right Stuff. I sipped on that over the first mile or so and legs seemed to be working reasonably well for the first 5 miles or so. I was stoked! Then around mile 6 I started feeling those familiar twinges again... Let's try more sodium to see if that was my answer? I had another ~2000mg sodium in my pockets in the form of Liquid IV powder in a flask (500mg) and then 2x Precision Hydration tabs (750mg each). I started with the Liquid IV flask- next aid station I added water to my flask which made a pretty concentrated solution, but I was also taking water with it so I sipped on that solution while drinking water and that seemed to bring my legs back around for a few miles. Then more twinges so ok lets try these Precision Hydration tabs... They say nothing new on race day but I knew if I did the same thing as I'd always done I'd be crawling to the finish line so I was willing to risk trying something new. Anyone ever chewed a Precision Hydration tab? Pro tip- only attempt that in small bites and only at an aid station where you can wash it down with water. Those things are effervescent and they burn your mouth if you just try to eat them. But, they're a lightweight way to carry concentrated sodium source so I'm all about those tabs now.

Anyway, I found it interesting how those seemed to be helping my muscles function... but only very temporarily. But really, if I do the math on it, if I'm losing 2900mg sodium/ hour and these 70.3 runs are taking me 2ish hours, I'm losing in the neighborhood of 5800 mg total just during the run... so even if I was fully topped off to start, the 3500ish mg that I took in during the run (which seemed like A LOT) still wasn't quite enough. I felt it too in the last 2 miles legs were going going gone and it got ugly there toward the end... but I made it further than I did at Honu for sure and felt stoked like I'm on the right path here solving my problem. I know people say that hydration and electrolyte losses aren't the cause of cramping, but my experiences prove to me that at least in my personal case, there is absolutely a correlation. And now that I have some concrete numbers to work with, I can keep experimenting over the next few months and see if I can't figure out a plan that might work to allow me to finish Kona without crawling. #goals

Anyway, I've started trying to trouble shoot with a few of my athletes who seem to have similar cramping problems, and the increased sodium on their key days seems to be helping them. We look at it in terms of fatigue vs depletion... when you're tired, is it because fitness isn't high enough to support your current effort? (Fatigue) Or is it because you haven't given your body the hydration/fuel/electrolytes to keep it functioning at its best? (Depletion). I feel like for the longest time I blamed all my cramping problems on fitness... so the solution was TRAIN MORE! But I'm rethinking that now and trying my best to avoid depletion as much as I can (which for some of us who live and train in high heat scenarios year round is way harder than we wish it was!)

This is the face of an athlete who feels like she's finally managed to start to solve a very frustrating puzzle... 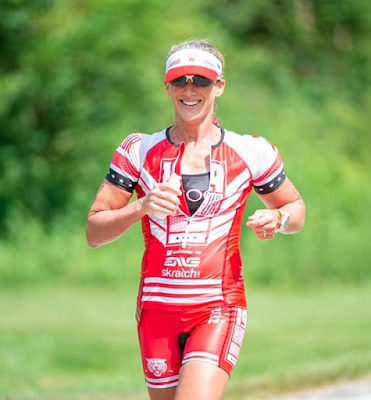